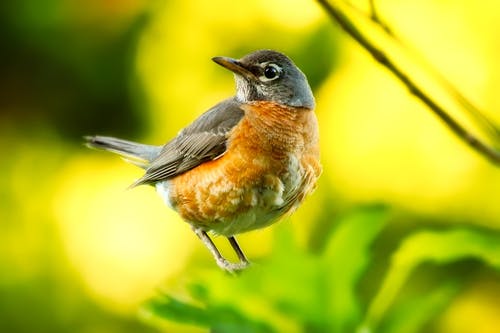 Why are robins one of the first birds seen in spring, while eagles are usually seen in winter and cardinals all-year-round?

With spring right around the corner, we’re all eager to see and hear the birds that give the Wisconsin woods, prairies and lakes life. Robins have been coined the first bird to arrive and serve as an indication that spring has begun, but why are robins one of the first birds to arrive?

And then there are eagles. If you have ever gone eagle watching in southern Wisconsin, you may know that one of the best times to see an eagle is during the winter – especially where there is open water. But why do eagles appear to migrate here during the winter months instead of going further down south where it’s nice and warm?

So, robins in the spring, eagles in the winter, and cardinals…all-year-round? How do they survive the unbearably cold Wisconsin winters? Why don’t they travel somewhere that may have more food, or, at least, a bit more tolerable climate?

When you see a robin, what is it usually doing? When I spot a robin, they’re usually hopping around in the grass, alone, searching for a juicy worm. If you get too close, they’ll fly away and let out a few chirps in excitement. If they aren’t on the ground, they’re often in a tree, making themselves obvious to anyone who cares to listen. These behaviors make robins easy to notice during the spring and summer months. But what the heck are they up to in the winter? You may be thinking, they’re soaking up the sun in some southern state; however, they may be closer to home than you realize. American Robins don’t migrate too far from home during the winter months. In fact, they may even be just a few miles away. (Photo courtesy of the National Audubon Society)

During winter, instead of flying long distances to a warm paradise, as some may visualize, American Robins form large groups and go into the forest, or anywhere there is a food source, to eat berries such as hackberries or buckthorn berries. So, robins may be harder to see during the winter since they are usually high in a tree rather than down on the ground looking for insects and worms. Also, they aren’t calling for mates during the colder months, so their quiet demeanor makes them less obvious to the passerby. Most American Robins in Wisconsin are here all-year-round. Only the northern portion of Wisconsin have robins that may migrate a little further south to look for food sources during the winter months. (Photo courtesy of the National Audubon Society)

To answer the question of why robins are one of the first birds you see during the spring – it’s because they were here all along! Or, they had a very short distance to travel to find their morning worm in the newly-thawed ground. Since Bald Eagles’ primary food source is fish, they are usually seen near rivers during the winter. (Photo courtesy Wildscreen)

Bald Eagles will only migrate if they need to. The determining factor of whether an eagle will migrate or not is if there is a food supply nearby. For eagles in Florida, or any other warmer state, they don’t migrate to follow a food source or to breed since they have a stable food source in one location all-year-round. Eagles in Florida also breed during winter to avoid the scorching hot summers. Eagles in Wisconsin, however, need to travel to find food during the winter and return to their nesting sites to breed during the warmer months. Most of the eagles that we see during the winter in southern Wisconsin travel north to breed. (Photo courtesy of North Dakota Birds, Birding and Nature).

So, we see more eagles during the winter since they travel together in large groups to find food. Since their favorite thing to eat are fish, they are often seen alongside unfrozen waterways. Lucky for us, this makes eagle watching in the winter pretty easy and interesting, since there is usually a convocation (group of eagles) and, if you’re lucky, you may even get to see them catch a fish!

It’s true that cardinals do not migrate. In fact, they usually stay within a one-and-a-half-mile radius from where they were born. What’s interesting is cardinals were originally only found in warmer locations, including the U.S. southeast, and have only recently started to expand their range to northern states, including Wisconsin. One possible reason for this expansion is the presence of winter bird feeders. With cardinals being one of the first birds Wisconsinites think of when they think of birds that stick out the cold winters here, it’s hard to believe that cardinals actually originated from southern states and have only recently expanded north. (Photo courtesy of Gardener’s Path)

Cardinals can stay in one place their whole life because seeds are their primary food source, which is an easy-to-find food since many people have a bird feeder in their yard. Since the cardinals are right there in your backyard, and cardinals are a beautiful bright red, they’re easy to spot. But if robins are still around during the winter, why don’t you see them at the bird feeder? As mentioned, robins’ primarily eat berries during the winter, so a bird feeder full of seeds won’t attract robins to your yard. As you can see by the pink color in the map above, Northern Cardinals are permanent residents in every location throughout Canada, the U.S., and Mexico. (Photo courtesy of The Cardinal Experience)

How You Can Help:

Since we’ve learned that robins, eagles and cardinals are all here during the winter, what can you do to make their survival more likely? For robins, you can try having chopped apples, berries and mealworms available in a bird feeder that will be easy for them to access. To increase your chances of seeing a robin this winter, try offering chopped apples, berries and mealworms in a heavy, shallow dish. (Photo credit Home and Garden News and Blogs)

It may seem like there is nothing you can do this winter to support bald eagles, since it would be a challenge to provide fish in your backyard; however, there are plenty of ways you can support eagles. You could donate to the DNR or symbolically adopt a bald eagle nest to help fund conservation efforts. Another way you can show your support for eagles is to attend an eagle watching event. Although the eagle watching events have already passed in Sauk Prairie, Fox River and Prairie du Chien, there is an eagle watching event this Saturday in Ferryville, WI. Since adult eagles come back to the same sites every winter, you could make it a family tradition to greet the eagles every winter! (Photo courtesy of Visit Ferryville)

Cardinals are the easiest bird to help this winter, and you may already be doing your part if you have a bird feeder. If you really want to make a cardinal’s day, be sure that the seeds in your bird feeder include black-oil Sunflower seeds and Safflower seeds. Another way you could help cardinals this winter is by having a heated birdbath so that they, and other birds, have water to drink. Big thanks to Amelia for bringing Jolene, the ther

Big thanks to Amelia for bringing Jolene, the therapy dog, to the Nature Center!Last week, the After-School students learned about climate change, and Jolene, the therapy dog, came to visit on Thursday to ease some of the climate anxiety that may have emerged from studying this topic!Animal assisted interventions can benefit people in terms of general wellness and mental health by decreasing levels of stress-related hormones and lowering blood pressure. Simply interacting with an animal can reduce feelings of loneliness and boost one's mood by increasing feelings of social support!Before volunteering at the Nature Center, Amelia completed training as a handler through Pet Partners and Jolene went through a rigorous evaluation to become a registered Therapy Animal. Jolene had to demonstrate that she is sociable, friendly, and comfortable around adults and children. She also had to show good basic obedience skills and that she loves being petted! Thank you again, Amelia and Jolene, for coming and making a terrific team!Photos: Betsy Parker, Aldo Leopold Nature Center#ThankfulThursday #TherapyAnimals #ClimateAnxiety #WIEnviroEd #EveryBodyOutside #NatureIsEverywhere #NatureIsForEveryone ...